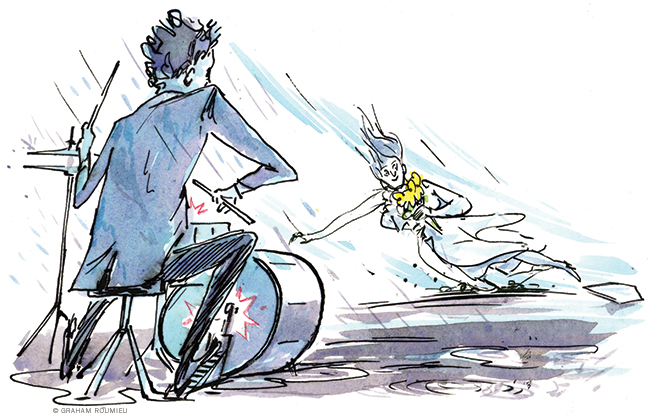 Every musician remembers his first wedding gig. Mine was unforgettable.

By Jackson Price | Spring rain drizzled on Northeast Philly as I peered through the backseat window of a Toyota Camry in which my Uber driver, an elderly Nigerian named Wale, had fallen asleep. We were parked next to the Jardel Recreation Center, and I anxiously scanned the scruffy infield of its softball diamond, wondering if anyone would actually show up. It was 8 a.m. Five months before, I had been hired to play drums for a wedding to be held at home plate at the stroke of 10 o’clock. A couple from Virginia had cold-emailed Penn’s music department in search of a drummer, and the request had been relayed to me. I took the job, and soon discovered that this wasn’t any ordinary wedding gig. In fact, it was unlike any gig I had ever booked. The bride and groom had, quite simply, hired a drummer to perform on their special day. No guitar. No bass. No piano. No backing track.

I was to play the drum grooves, unaccompanied, to three songs during the ceremony: “You’re The First, The Last, My Everything” by Barry White; “Good Life” by OneRepublic; and “Ain’t No Mountain High Enough” by Marvin Gaye and Tami Terrell. Though the Marvin Gaye tune has a fairly iconic drum part, I was doubtful that the untrained ears of the wedding guests would be able to recognize what songs I was actually playing. But Kelsey and Connor (as I will call them, to protect their privacy) envisioned a live solo drummer on their special day, and I wanted to make their wedding as perfect as possible.

Though I’ve been drumming for 14 years, this was my first wedding gig. Naturally, I was overeager to appear professional, so I had rolled up next to the empty park two hours early. Much to Wale’s dismay, given the other Uber customers waiting for rides, I wanted to stay in the car—where I would stay safe and my drums would stay dry—and wait until at least one other person showed up.

Finally, after one nervous phone call with the bride and three sessions of Wale’s ear-splitting snoring, a car full of tuxedo-clad passengers pulled up behind us.

I set up my drums next to first base. Luckily, all I needed for this gig was a stripped-down kit consisting of bass, snare, and hi-hats. Unluckily, it was expected to rain through the entire wedding (cue cheesy Alanis Morissette chorus). I barely had time to worry about how my wet hair would look in any photos taken of me, because I knew that my drum shells would start to warp if left in the rain for too long—the thin lacquer coating wouldn’t be enough to protect those maple shells until the I do’s. I scrambled to cover the kit with everything I had at my disposal: towels, raincoat, the drum cases themselves, and, finally, my suit jacket.

Meanwhile guests began filing in. They covered the infield with rows of foldout chairs and Louisville Slugger baseball bats. A man approached me and introduced himself as the park manager. Kelsey and Connor, he explained, wanted their special day to be baseball-themed, for sentimental reasons.

A group of 30- and 40-something men soon congregated around a long table propped up near the third-base side dugout. The groom emerged from the crowd and called out an unexpected invitation. “Hey Jackson! If you’re hungry, help yourself to some chocolate milk and donuts!”

My head said no (I was trying to stay away from sweets). But my stomach, filled only by the stale Kind Bar I had eaten for breakfast in Wale’s car, said yes. I abandoned my lonely station near the drums and, burrowing my shivering hands deep in my pockets, proceeded to half-run, half-waddle over to the snack table.

After some pleasant small talk with the other guests, I snagged another chocolate milk and headed back to the drums on my side of the field. I took a step back and took stock of my set-up. Half of a drum set stood in solitude on a muddy first-base line, covered in makeshift rain protection. A chewed-up pair of hickory Vic Firth SPE drumsticks lay completely exposed atop the towel that was shielding my snare drum.

It wasn’t pretty, but hopefully it would get the job done.

The rain began to lighten up just in time for the guests to settle into their seats. Soon 10 rows of tuxedos, dresses, and umbrellas filled the infield, buzzing with anticipation. I took a sip of Nesquik, picked up my wet drumsticks, and silently awaited some kind of signal. I locked eyes with a man I took to be the Best. He flashed a friendly smile and a thumbs up. Time for a drums-only version of “You’re The First, The Last, My Everything.”

I laid down the groove that helped launch Barry White, Donna Summer, the Bee Gees, and countless other disco artists into stardom: driving quarter notes on the bass drum (the low-pitched thud to which people dance, or the “pulse” of the song); snare on “2” and “4” (the back beat); and eighth notes on the hi-hat, slightly lifting up my left foot to create a subtle tss sound on the “and” of beat “4.”

Connor emerged from behind the backstop and rounded the bases until he reached second. He glanced over at me and nodded. I kept playing.

Never in my professional music career had I envisioned playing a disco drum solo on a muddy softball field to mark a sacramental event. The drums felt so empty without any accompaniment. I couldn’t help but think that even Wale’s snoring would have helped fill out the sound. But my self-conscious awkwardness vanished when I noticed that Connor’s mother was definitely feeling my disco groove—she escorted the groom from second base down to home plate with a gait that could only be described as a dance-strut. If Mom likes it,I thought, then I must be doing something right. I smiled and drummed on. They came to a rest at home plate about 45 seconds later. That was my cue to end the Barry White tune.

There was a brief pause in the ceremony. Connor then waved to me from home plate and mouthed, “Go!”

At this point in the ceremony, one might have expected to hear a rendition of “Here Comes the Bride.” Not at this wedding. Accompanied by bridesmaids holding up her bridal gown to keep it out of the mud, Kelsey took the field as I snapped out the poppy “Good Life” drum part: a fun variation on the classic rock groove with snare on the “a” of beat “2” (à la The Who). She traced Connor’s path around the field, striding over the pitcher’s mound and stopping at home plate. Her entire procession lasted a minute and a half.

I stood up from behind my drum set and inched forward to get a closer view of the bride and groom. Not only was this my first wedding gig, it was, believe it or not, the first time I’d been to a wedding at all. Witnessing those two stare at each other across home plate was a remarkable thing any way you cut it.

They recited their vows, said “I do,” kissed, and—just like that—became husband and wife. There wasn’t much time for me to cheer, though. I had to play them out. I hurried back to my drums, blew some warm air into my hands, and played the opening boom, clickclickclickclickclick of “Ain’t No Mountain High Enough.” Kelsey and Connor cut through the infield while the guests cheered and tapped their feet to my drumming. Twenty seconds later, the newlyweds stopped at second base. I put down my soggy drum sticks and walked over to congratulate them.

I knew I had nailed all three songs, but I was still a little nervous that my drums-only performance sounded as strange as it looked. But my worries were misplaced. Kelsey gave me a giant hug and proclaimed my performance “perfect”—“exactly what we wanted.” Connor shook my hand, thanked me for everything, and invited me to the reception a couple blocks away. The ultimate offer for a hungry college student! What could beat free food, free drinks, and free confidence-boosters every time the groom’s 70-year-old mother told me what a handsome young man I was? Unfortunately, I had another job waiting for me back on campus: a three-page close reading of Italo Calvino’s architectural adaptation of the mythological Baucis and Philemon, from his novel Invisible Cities. So I packed up my drums and summoned a (much less tired) Uber driver to take me back to Penn.

I returned to campus one step deeper into life as a professional drummer. Over the years I’ve performed at the Whisky a Go Go, The Roxy, and iconic venues in Hollywood; recorded a single with a band, played in musicals, amassed tens of thousands of views on YouTube; and given private drum lessons—all standard parts of any musician’s livelihood. Now, even if it had only meant playing unaccompanied on a muddy softball field in Northeast Philly for a grand total of three minutes, I could finally add wedding gig to the list.

Essays
Pictures at an Exhibition