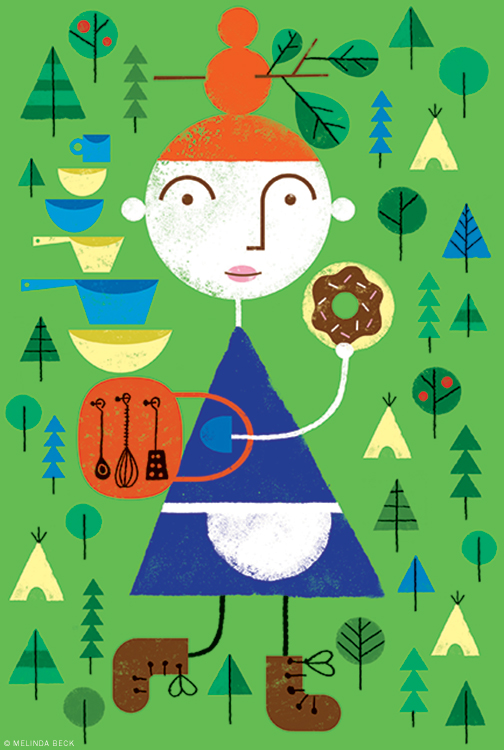 Notes from my backcountry recipe book.

Haley Weiss | Seven items lie haphazardly on a flat patch of grass in front of me. A durable green plastic bowl. A pop-cap fuel can, with a screw-on stovetop attachment. A massive pot, charred black on the bottom and slightly bent in one spot. A lid that covers the pot, but is noticeably a mismatch.

Then my hand tools. A lightweight titanium utensil sporting a spoon on one side and a fork on the other, emblazoned with the words “Light my Fire.” Last, my darling Swiss Army Knife, whose menacing yet rarely useful serrated saw eternally renews my regret over not purchasing the model with practical fold-out scissors instead.

This is my chef’s kit. In a kitchen, I might scoff at such a paltry setup. I’d opt for a sleek stovetop over the challenge of gingerly holding a lighter next to three collapsible stove prongs as I loosen the screw-on attachment to the sweet spot of ignition. But the closest kitchen is 20 miles away. And my workspace has one advantage that I, along with tonight’s dinner guests, value above all else: mobility.

Mobility is one of the greatest joys of a backcountry excursion, which is why many backpackers share a specific mentality when it comes to nourishment on the trail: Food is fuel. Dense foods like nuts and beans are a hiker’s manna, cramming a hefty payoff of protein and calories for each ounce jammed into a pack.

But when I started backpacking, I was inducted into a tradition of a different sort—that of the grubby gourmet.

Food and backpacking share a distinct capacity to unite a group of people, a quality I’ve failed to find in many other areas of my life. When I sit down to a meal with friends or take a few days off to wander the woods, there is no multitasking. It’s rude to pull out a phone at the table—and useless when you’re miles from the nearest cell tower. Cooking and eating in the wild transforms ordinary social exchanges into moments of deep, raw connection stripped of all distractions. My backcountry cookbook serves as a sort of journal of moments I’ve shared with others. My favorite recipe is simply titled “Peanut Butter,” whose instructions read:

1. Wait until everyone else at this breathtaking Kesugi Ridge campsite in Denali National Park falls asleep. Except for Campbell, of course.

2. Hike 10 minutes by headlamp to the bear canisters; open them all; find the group peanut butter.

3. Eat it with Campbell, right out of the jar, not even scared of bears anymore. Talk about life for an hour. Never admit to anyone else what the two of you’ve just done when the PB rations are mysteriously depleted.

The rest of the recipes vary in detail and level of complexity. Rice and Beans: a warm bowl, topped with heart-stopping amounts of shredded cheese, cooked over an open flame in the Alaska bush, shared in a huddle under a thin blue tarp as rain brought the same flame to a dying sizzle. Gado-gado: boiled ramen noodles topped with peanut butter, soy sauce, and Sriracha—the written instructions a reminder of the time that I ate a bowl of the stuff laced with flecks of dirt, cheered on by the same friends who’d watched me trip and spill it on a moss-covered rock. In the backcountry, we eat by the law of Leave No Trace.

I was raised as a child of the outdoors, by parents who love a good hike just as much as they love returning to a warm restaurant meal and comfortable hotel bed afterwards. Determined to outdo them in the area they’d taught me to love the most, I signed up for my first of three extended backpacking trips the summer I turned 15. I revered my instructors, who were owners and masters of a unique skill set gained only through years of experience in an environment far removed from the rest of humanity. I saw, in all their granola glory, the deep burning love they had for a style of exploration that I hoped would deliver me an addictive mixture of intense joy and grueling challenges.

My first night in the backcountry was unforgettable for all the wrong reasons. Sheltered by the thin mesh walls of a hastily assembled tent, I couldn’t fall asleep when each small sound from the forest had me convinced a nearby bear was poised to attack. The journal entry I wrote that night lists my discomforts and complaints, but also my goals of overcoming them. I was determined to learn the lifestyle—and I started with the food.

That first summer, I learned how to purify water with Aquamira, a reactive chlorine-based solution. Two summers later, I revised my standards for acceptable water sources when a territorial grizzly left my group with no option but a lake in which every scoop of water came with a hefty portion of bug larvae. I learned how to set up any variety of tents, and how to repair them when an alpine wind sent a rock tearing straight through the wall. I learned how to deploy a bear hang on a tree branch in order to keep food and toiletries out of the reaches of hungry scavengers—and learned that I had more to master when a South Carolinian black bear with a penchant for dehydrated stuffing served up a recent spring-break reminder that, in many areas, the skills I picked up at 15 are still far from perfect.

But I know more wilderness recipes than I do useful knots. I know exactly how many days different food products can last without refrigeration. Broccoli’s stench after one to two full days, weather dependent, can inspire a lifelong aversion to the brassicas. Cucumbers grow slimy by the end of a week. A block of pepper jack cheese is good for six days if I’m feeding it to others, and two more when I (inevitably) assume the personal risk of nibbling at the remainder.

I know how much food to pack for groups of different sizes and dietary habits, and I know at least three different games to play in which leftovers can be doled out as punishment when eating what remains is really the only method of disposal. On each of those teenage summer trips, I’d collect recipes from the “Food Master,” an instructor charged with the regular feeding of upwards of 20 starving adolescents. I always volunteered to cook at our campsites. My favorite part of a backcountry day quickly became sitting in the woods in a circle of friends clutching steaming neon plastic bowls. After a day of hiking too exhausting to talk to anyone but the person directly in front of or behind you, there has always been a warmth for me in hitting the moment when people can finally loosen their shoelaces, breathe a little deeper, and come together as a group over the sacred lull of dinner.

I first mastered the classics, like rice and beans, gado-gado, and ramen extreme (a bowl of ramen with dehydrated potato flakes and a mound of shredded cheese). In later years, I started to get creative with original recipes. I’m most proud of a creation I call the “backcountry donut,” a pan-fried English muffin with chocolate syrup and sprinkles on top. The flavor is somehow a dead ringer for a store-bought donut. My secret ingredient is atmosphere. Food just tastes better in the woods—a rule that has no exceptions.

In the past few years I’ve begun leading backpacking trips of my own, through the Penn Outdoors Club. Some of the people I bring have never laced up a hiking boot before, while others are backcountry junkies—some of my closest friends, people I’ll keep hiking with long after we graduate. I’ve witnessed an appalling number of chaotic incidents and failures on these trips, the exact count of which I’m too embarrassed to disclose. Highlights have included a wall-less “tent” rigged out of poles and a rain fly after the main component was left behind in a parking lot, a friend who impaled his foot on a tent stake while wandering a campsite without shoes, and a water purification system that completely lost the will to live 15 miles into the Pennsylvania woods. The instructors of my high school years would no doubt be appalled, and I’ll freely admit that I’ve got a way to go to match their caliber of outdoors leadership, but in the meantime I’m proud of one important thing: Nobody who’s followed me into the woods has ever come out hungry.

Haley Weiss is a College junior from Pennsylvania.