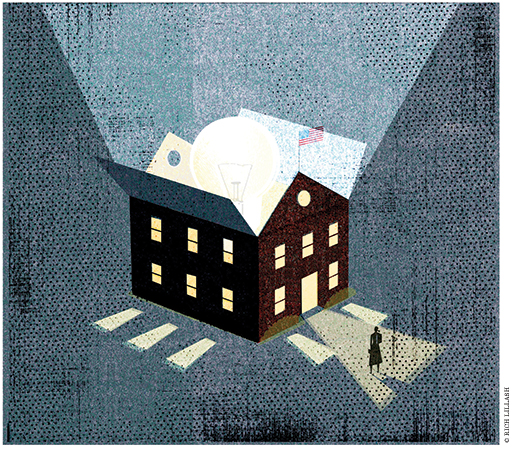 By Walt Gardner | America’s public schools have been a target of criticism since their beginning. But only recently have attacks reached a pitch so fevered that, for an increasing number of advocates and opinion-makers, the only acceptable solution is the most drastic one: tear down the entire system and start over.

The worries are well-known, and quite real. Despite regular increases in educational expenditures since the landmark A Nation at Risk report in 1983, more than one in five recent high school graduates do not currently meet minimum entry-test standards to enlist in the Army, according to the Education Trust. This test measures basic literacy and numeracy, and is not intended to identify potential officer candidates. That’s one reason why today’s all-time high graduation rate of 82.3 percent, up from 70 percent a decade ago, merits healthy skepticism. Shortcuts and gimmicks like online “credit recovery” courses have further undermined confidence in reported outcomes, and called into question the wisdom of continuing to pump more dollars into existing schools. Taxpayer patience is approaching its limit.

In light of these factors, it’s little wonder that reformers have captured the public’s attention. They are a diverse group, consisting of ideologues as well as pragmatists, united by the conviction that it’s futile to continue working within the sclerotic system. That’s why they espouse a tantalizingly straightforward solution: scrap it, and innovate a completely new one.

One example of this promised revolution is parental choice: let parents pick their own children’s schools, and then let the chips fall where they may. Competition will force underperforming schools to close and new ones to open. Charter schools are the poster children of this approach. Yet 25 years after Minnesota became the first state to authorize them, the jury is out on their effectiveness and scalability. They also show how fraught “choice” is in the context of education, where non-school factors (like family wealth or food-insecurity) often trump in-school determinants of educational outcomes. Although parents can read news stories about school rankings, these lists typically underscore the barriers surrounding the best-regarded schools: unaffordable housing in good neighborhood school catchments, and entrance lotteries for popular charters. That leaves parents in a quandary as they try to navigate the open educational marketplace.

Today, there are about 6,700 charter schools enrolling three million US students. Studies have reported mixed outcomes, suggesting that the best that can be said for charters is that sometimes individual schools work, but at too great a price. Even as a large number of charters depend on foundations to make up for public funding levels that trail per-pupil expenditures in traditional schools, the growth of charters (which create costly redundancies when they add capacity, and sudden crises in cases of abrupt closure) has inflicted budgetary chaos on urban school districts. Another potential cost is evident in charges by the NAACP and the Movement for Black Lives that charter schools have worsened segregation.

Despite the decidedly uneven record, reformers are convinced they have found the secret in replication: identify a good school and simply copy it over and over again. The latest to jump on this bandwagon is the Walton Family Foundation, which in June announced the creation of a $25 million nonprofit to provide low-interest loans to create charter schools. It follows on the heels of the US Department of Education’s May announcement of a competition to award $65 million in charter replication grants. But recreating a chain of successful schools is not like recreating a chain of successful Starbucks. Local cultural and social factors play underappreciated roles. What works in one venue does not necessarily work in another. Jaime Escalante of Stand and Deliver fame was unable to repeat his classroom magic when he moved from Garfield High School in East Los Angeles in 1991 to teach at Hiram Johnson High School in Sacramento for seven years. Although he was still the same virtuoso, the setting was entirely different.

What reformers don’t acknowledge is that renovating schools, buying equipment, and hiring teachers remain expensive no matter how often the process is repeated, because education by its very nature is a labor-intensive endeavor. No wonder, then, that no less an innovator (and education funder) than Bill Gates told the Wall Street Journal in 2011, “I applaud people for coming into this space, but unfortunately it hasn’t led to significant improvements.”

Perhaps the impediment is lodged right in the center of the reformers’ creed: the notion that starting anew is the only solution. After all, despite the uneven performance of traditional public schools, school parents do not as a whole seem to be running for the exits. When given the chance, voters have overwhelmingly defeated vouchers or their variants in 28 state referendums between 1966 and 2014. Moreover, although 68 percent of respondents to the most recent Phi Delta Kappa/Gallup poll gave the nation’s public schools a “C,” “D,” or “F,” 67 percent of public school parent gave their own children’s current school an “A” or “B.” Evidently their direct experience of schooling fosters a quite different attitude than the one encouraged by reformers’ loud claims of abject nationwide failure.

The US has some 50 million students who are taught by approximately 3.2 million teachers in about 98,000 public schools. According to the National Center for Education Statistics, we spend about $12,600 per student. These students range from English-language learners to the children of novelists, and from special-needs kids to middle-school robotics club members. Yet despite the immense scale, complexity, and ambition of this challenge—which seeks no less than to create employable, well-adjusted, civically responsible citizens—our public schools are satisfying the overwhelming majority of parents, at the same time that they are serving a more diverse range of students than ever before in the nation’s history.

It’s time, then, to ask a more modest question: can the nation’s schools be improved by making them more meaningful to the students they serve? The answer to this question is a resounding yes—and the most promising method can be found in our own history of schooling, though one that has fallen out of favor.

Embracing it will not require scrapping the entire educational edifice—but it will require acknowledgement that the present system is based on unrealistic expectations.

For one thing, not all students are interested in or capable of going to college. Offering them an enriched vocational curriculum in high school, in line with their needs and interests, will engage them and reduce disruptive behavior. When combined with apprenticeships, these programs have the potential to restore taxpayer confidence.

Along the same lines, gifted students are every bit as entitled to a curriculum geared to their abilities as others. Too many are understandably bored to death by classes designed for their less able classmates. But concerns about elitism continue to deny them the stimulation they deserve. Though they are destined to become the future leaders in their fields of expertise, they are treated like afterthoughts between the ages of 5 and 18, at which point they can finally encounter sufficiently challenging material in college.

Only the United States regards differentiation in education as antithetical to democracy. Our peer nations and competitors abroad have no problem sorting out students based on testing and teacher recommendations. Tracking has benefited both students who are grouped with others of similar ability, and their teachers, who gain the ability to design instruction specifically geared to the needs of their charges.

It is clear by any measure that the US is at an educational crossroads. Much now depends on whether we can get beyond what Charles Murray, in Real Education, calls “educational romanticism.” We need to accept that even the best teachers are not miracle workers, and schools do not pipe in their water from the grotto at Lourdes. By themselves, they cannot overcome the huge deficits in socialization, motivation, and intellectual development that so many students from low-income families bring to school through no fault of their own.

There is still hope for public schools, but only if we recommit ourselves to the long and necessarily incremental project of improving their ability to serve students of all varieties, not falling for the simplistic notion that we must first backtrack all the way back to square one.